My partner Gregg goes for a walk every evening and yesterday while he was walking he found this orchid growing on a dead branch of a tree in the ditch beside the road so being the orchid lovers that we are we decided to save it before someone cut down the tree and just left it to die. The blooms are a pale shade of green and the neat part is that it was planted by Mother Nature. This orchid is starting to have babies so when they get a bit larger we are going to plant them on some trees around our house. Below are three pictures of the orchid. Hope you enjoy. 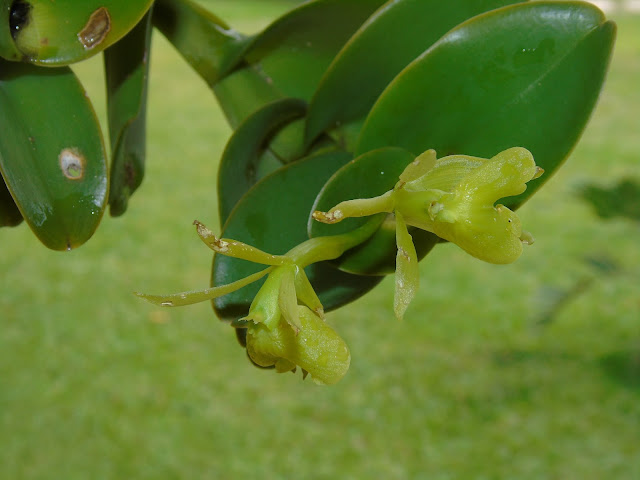 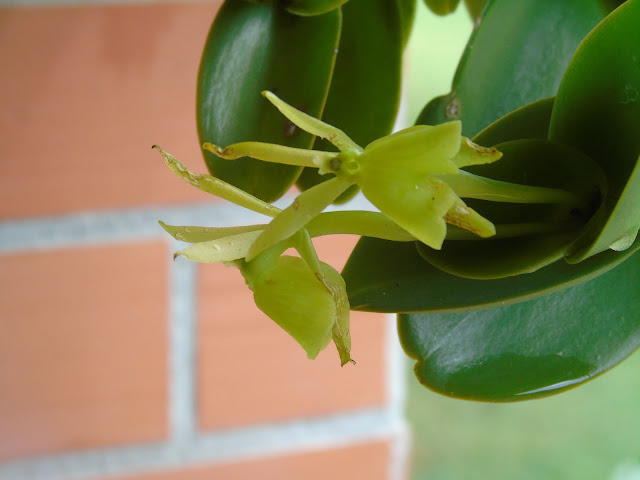 Today I thought I would share a couple of pictures of trees that are in bloom around our property right now. Sorry but I do not know what the names of the trees are but if I get a chance I will look them up. Enjoy. 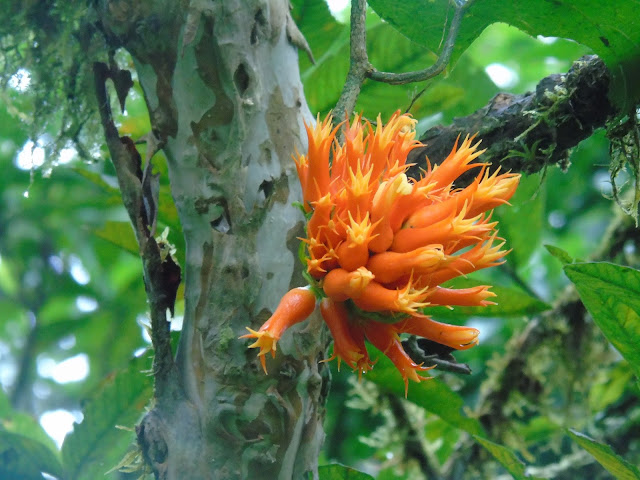 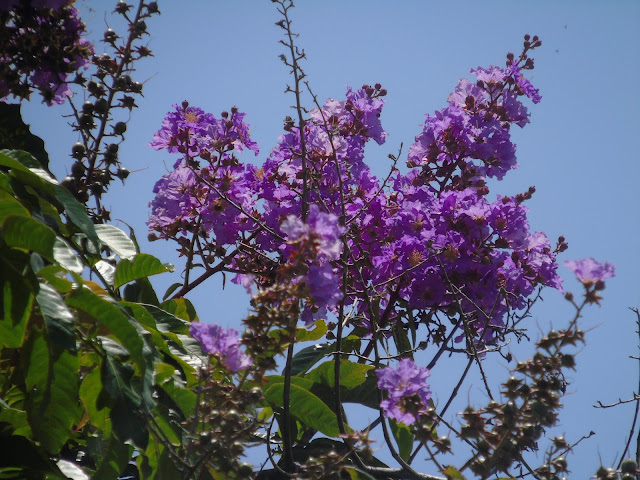 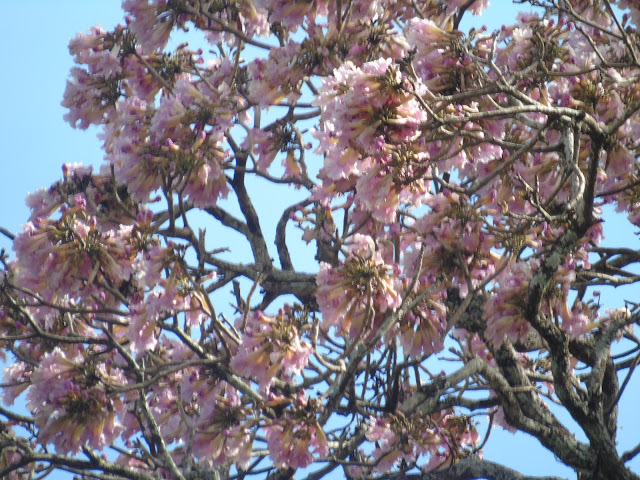 Email ThisBlogThis!Share to TwitterShare to FacebookShare to Pinterest
Labels: Trees in Bloom

Well we have finally started rainy season. Usually it starts in April and this has been the latest it has ever started that people can remember and yet there are still people who do not believe that we are in a state of global warming and that it is affecting our climate.

When in rains here it is a full downpour where you can measure a couple of inches in an hour. The neat thing in El Valle is that the ditches are wide and deep and most are lined with cement so when the rain stops things dry up very fast letting you enjoy the outdoors until the next downpour. I thought an umbrella would be handy to have but it pours down so hard that it is useless. If you are out you are going to get soaked. You know you are getting heavy rain when your eavestroughs are 10" wide and 8" deep and they overflow.

Gregg went for a hike today and these are the birds nests that he saw. 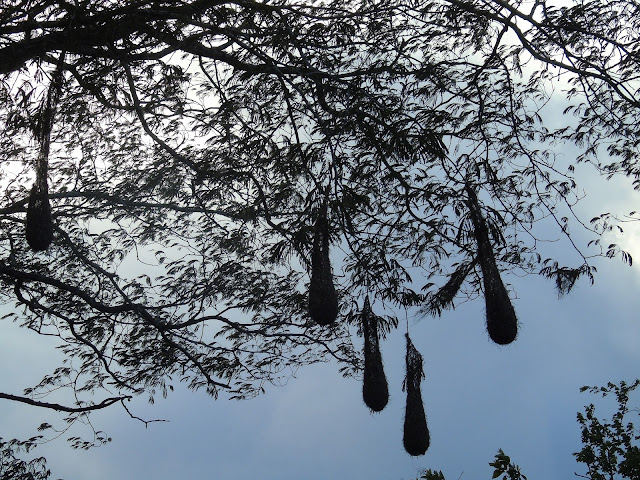 The Crutches Story and a Beautiful Orchid Planted by Mother Nature

Thank you everyone for your comments and concern. Unfortunately I am on crutches permanently. I had a hip replacement surgery done in 2010 and for the first 6 months things were going okay except when I sat down I could feel the metal pushing against my muscle and then one day when I was walking our dogs and I was using 2 canes and it became so painful that I could not walk without crutches. At the same time I was also diagnosed with Severe Osteoporosis and they found two vertebrae with compression fractures that just added to the problem. So for now it is crutches.

On to a happier topic. We have a tree in our backyard that looks more dead than alive but it is covered in different types of Orchids, Bromeliads, and Ferns. 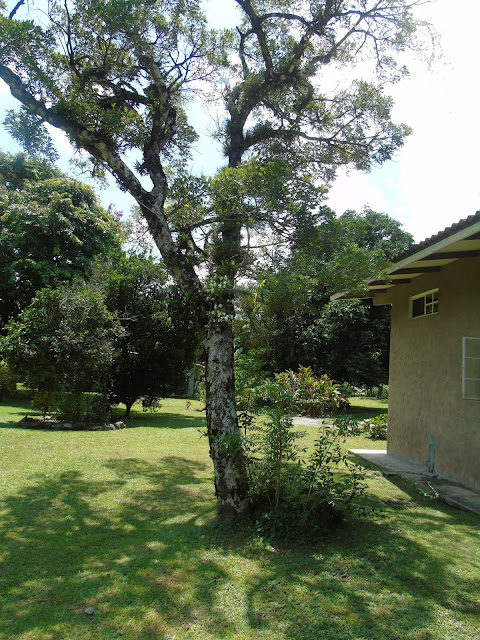 This week we noticed that one bunch of the orchids were going to bloom so this is how they looked the first day.

On the second day they opened and looked amazing, but the next day all the blooms had died. Oh well they were pretty while they lasted. 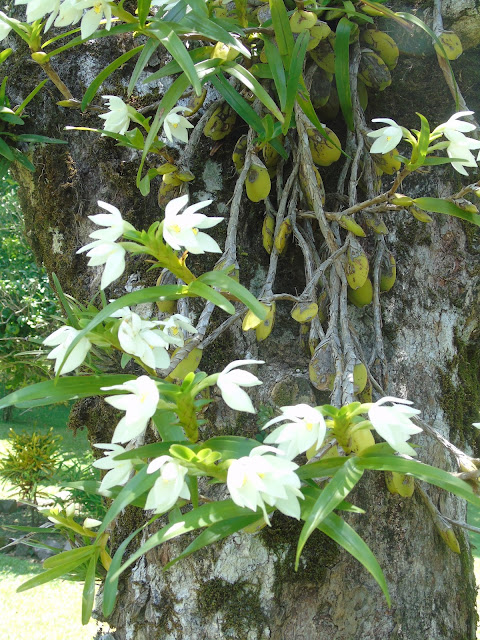 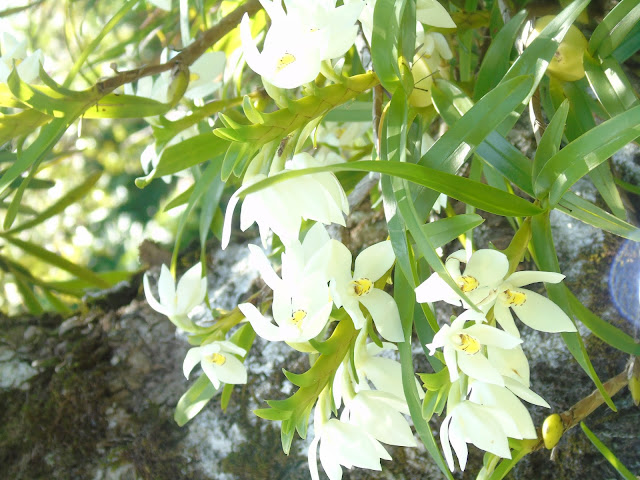 Followers Who Enjoy My Blog